What is Data Gravity and Why Should Marketers Care? 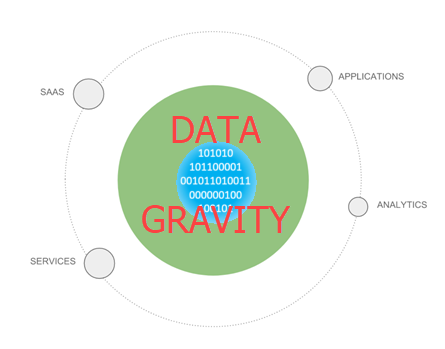 What is Data Gravity and Why Should Marketers Care?

Dave McCrory first introduced the concept of Data Gravity back in 2010, referring to Salesforce’s Database.com launch. The big idea of data gravity in his own words is —

As data accumulates (builds mass) there is a greater likelihood that additional services and applications will be attracted to this data. This is the same effect gravity has on objects around a planet. As the mass or density increases, so does the strength of gravitational pull.

That’s sounds interesting in theory, but what does it mean in real life? As the volume of data generated grows exponentially, due to the Von Neumann bottleneck it becomes critical for applications to head towards the location of data storage in order to maximize throughput and reduce latency. And just like the gravitational pull increases as the mass is higher, applications that are close to the data have increasing value as its volume increases.

Historically, since enterprise data was primarily stored locally Tableau was built as a desktop application. However, as enterprises now move away from on-prem to cloud storage, keeping the BI Platform and data store separate adds latency and slows down performance.

To optimize for performance, cloud providers like Amazon and Microsoft have begun to adapt and launched their own BI Applications like Amazon’s QuickSight and Microsoft’s PowerBI. These solutions sit right on top of the data and perform a lot better than legacy solutions.

Many businesses use data to enable their operations, from internal data like financial files, to external data like weather information or statistics around customer behavior. For these enterprises, data gravity imposes certain limitations on how they do business.

Traditionally, data was generated and stored internally and on-premises. This made it easy for analytics platforms to “own” the data they were crunching. But as the amount of external data increases, applications have to migrate data from other platforms in order to analyze it. These days, businesses tend to store and access their data using hybrid solutions that include both cloud, and on-premises storage. But businesses don’t just want to store data — they want to use it.

For over a decade, data storage has been migrating to the cloud. The percentage of enterprises processing data in the cloud grew from 58% in 2017 to 73% in 2018, reflecting improved tools and scalability — and certainly contributing to further data gravity within the cloud.

But the IoT presents a new set of challenges in dealing with data, as it exists at the periphery of the network, meaning the data it produces may not be easily utilized by centralized applications in the cloud. This is especially true considering the deluge of data being produced by these increasingly critical devices. At the same time, for IoT devices in factories, hospitals, or automobiles, low latency data processing is an absolute necessity. Edge computing seeks to solve this problem by bringing data processing right to the device, avoiding the bandwidth costs and slowdowns associated with pushing data to the cloud.

Across the board, IT teams and networking solutions providers are working to enable enterprises to better use this data. IBM recently overhauled its Cloud Private for Data platform to allow customers to use analytics wherever their data is, whether that’s in an IoT device or a private cloud. And Microsoft’s “Intelligent Edge” strategy calls for enabling software to run on IoT devices, using ever-smaller processing hardware.

Data gravity is defined by Dave McCrory in the below figure; more on his equation can be viewed at datagravity.org:

Data Gravity — Why Should Marketers Care?

In a world where marketing leaders will spend more than $100 billion by 2019 on search, display, social, and email marketing — a figure that surpasses broadcast and cable television spend (Source) — marketing data is probably the most massive of all! It’s surprising that a majority of performance marketing leaders still rely on solutions like Tableau that were never built for marketing, and sit multiple levels away.

There are multiple problems with Tableau. First, though Tableau has led the wave in data visualization, latency issues that arise from cloud deployments can severely hinder its ability to handle large marketing datasets. As the volume of data increases and real-time performance insights require more and more pulls, the latency will add up (Source). Insights have a quick expiry, which renders Tableau a severely handicapped solution for marketers’ needs.

There’s a second, deeper problem with Tableau. It boils down to the power of context. Consider you are presented with an extension-less file — DSC0001. If you open it with a text editor, all you would see is junk values which don’t make sense. But, in the text dump you notice the words — Canon PowerShot. You guess that this is an image file and add the extension .jpg. Now you can see the actual image! That’s one layer of context — understanding that cameras generate .jpg files.

Let us add another layer of context — you upload the file to Google Photos. It recognizes and automatically shows metadata like dimensions, resolution, f-stop, shutter speed, ISO, etc. Now you not only have the image, but also a host of information that will allow you to understand why the photo looks the way it does. Is it too blurry? You can take one look at the shutter speed and understand why.

Data by itself is useless. Applications need depth of context, in order to help marketers make sense out of it. Adding context is what turns data into useful information, which when combined with prior knowledge can help facilitate action. And this is exactly where Tableau, and even QuickSight and PowerBI fall flat. As BI tools that are horizontal solutions, they can ingest any dataset. But only an application with context can understand that quality score cannot simply be summed up, it needs to be treated as a weighted average.

Until now marketers have been forced to adapt their workflows to fit in BI tools that are slow, cross-functional and controlled by IT. Instead of a fast, flexible marketing-centered application that’s built to empower the existing workflows of marketers. Hence the case for one that not only sits right where the data is, but also has all of the marketing context built-in — to work with Marketing that is always-on rather than BI systems which were built primarily for historical analysis.

That’s exactly what we at Clarisights are building. Some of the largest data-driven companies and agencies around the world have been able to transform the way they leverage their marketing data, using Clarisights.

Enterprises are eager to generate and make good use of the data to which they have access — and for good reason. Data analytics is increasingly providing the insights they need to remain competitive. Many industries have already come to rely on the operational advantages provided by IoT devices. But just as many IT departments are struggling to effectively manage the storage and processing of all that data. 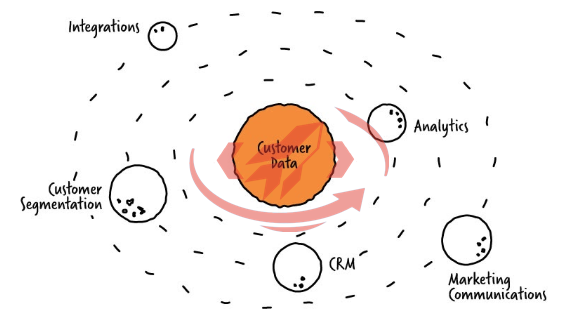 If your business is looking to overcome the limitations of data gravity, it may be time to pair with the experts at Turn-key Technologies (TTI). With decades of experience and a thorough understanding of data storage and management, TTI has the expertise necessary to help modern-day enterprises implement cloud and edge computing solutions that will help them capitalize on their data with the speed and cost-efficiency the modern marketplace demands.