About three hours ago I handed in an exam in full awareness that my grade is going to suck. I failed. Despite my best efforts, I wasn’t prepared well enough. Sure, the exercises sucked, but that’s just how life works. Yet here I am, writing my summary, continuing my day.

That’s the exact kind of attitude John C. Maxwell wants to teach us with this book. Failing Forward is about losing some of the conditioning we’ve all come out of high school with – the paralyzing fear of failure. Even for the most talented of us there’s no question if we’ll fail. It’s a matter of when.

Once we do, the real question becomes how we’ll react to it. That’s where John’s idea of failing forward comes in. It’s about seeing failure at the horizon, but still moving ahead with confidence.

Here are 3 lessons to help you change your perspective:

Ready to stop falling and start failing, but failing forward? Let’s learn how to stumble our way into success!

Lesson 1: You might not be responsible for your failures, but you can sure take responsibility for your success.

This year the G20 summit took place in Hamburg, Germany. It’s an important political event on a global scale, with some of the world’s most powerful countries’ leaders sitting together, talking about economics, finances, health, security, and so on. There are always protesters demonstrating for certain causes during the event, but this year, it was engulfed in a wave of vandalism.

Masked men stormed around the city, destroying everything in sight, just for the fun of it. They torched cars, ruined public facilities and trashed entire stores. I remember seeing the owner of an organic grocery store standing in his 500,000 € loss.

This failure wasn’t his fault by any means. But how fast he turns it around is up to him. A similar thing happened to Greg Horn in 1997. His store was destroyed by the Kentucky Floods and guess what the only thing was he hadn’t insured it for? Water.

Instead of giving up, though, he took responsibility for getting back to success. He continued to support his 80 employees and scraped together the $1 million it took to repair everything. Within 21 days, he was back up and running.

It’s not always your fault when things go wrong. But when you give up and sit and wallow, that is.

Lesson 2: Turn failure into knowledge and knowledge into success.

Maxwell tells an interesting story from another classic book, Art & Fear by Ted Orland. The teacher of a ceramics class divides her students into two groups. She told the first group they’d be graded based on how many pieces they created over the course of the class. The second group was supposed to make just one piece of pottery, but make that the best they can.

Your gut might tell you the second group should produce better work, but actually, the first group completely outgunned them when it came to quality of their creations. Why? Two reasons: 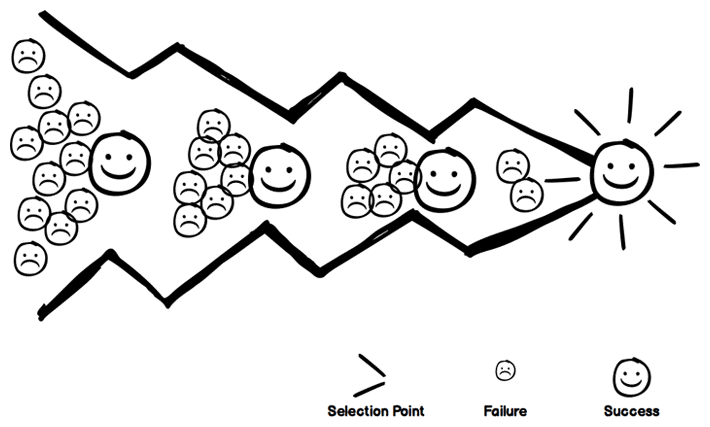 This is how failure leads to success. When we put too much pressure on ourselves, we often don’t have the stomach to re-visit our failure. But how else should we find out what we did wrong?

Make more. Quantity over quality. Be determined to understand your failures. And then improve each time.

Lesson 3: Three things help you make the most of the opportunities that come your way.

When your perspective shifts and failure slowly begins to transform into the stepping stone it actually is, you’ll be much more willing to take each and every single opportunity that comes your way. But just because failing isn’t so bad any more that doesn’t mean you should set out to bomb on purpose.

Instead, try to make the most of each shot you get. John suggests working on three things to ensure you do:

These are just starting points. But not only will they help you make the most of failing more, they’re even great skills to practice failing forward in. The point is to not let setbacks set you back for too long. I hope this book will help you do just that.

John C. Maxwell’s most popular book is The 21 Irrefutable Laws Of Leadership. This one isn’t quite as practical. It’s more on the inspirational side. But if it gets you to adjust your perspective about failure even slightly, it’ll be well worth your time. If you liked this summary, give Failing Forward a go.

What else can you learn from the blinks?

Who would I recommend the Failing Forward summary to?

The 33 year old brick and mortar store owner, the 65 year old hobby artist, who’s frustrated about not getting anywhere with her new hobby, and anyone who shudders at even the thought of a test.